I have long believed that experiences mean so much more than any material possession. I hatched up a plan to take my kids wherever they wanted to go for their 16th Birthday. I knew that I would not have enough money to buy them a car but I did work where I got hotel points and knew that I could trade some of them in to make a pretty nice trip.

My ex won’t let my kids have a passport. You need both parents to sign off on a passport until the kids turn 16 (I had previously thought it was at 18 years old). So, when I asked her where she wanted to go – and she responded, “a beach in Mexico.” I knew I  couldn’t make that happen. That is how we decided on Puerto Rico. As a U.S. Territory – U.S. citizens don’t need a passport to travel to Puerto Rico. But, since Spanish is the primary language it would feel like Mexico. (Coincidentially they were in the news right before we went as they have voted to try to become the 51st state).

We chose to stay at the San Juan Marriott Resort and Stellaris Casino. One of the primary factors that went into that decision was they are right on Condado beach and family friendly.  It is also in a safe neighborhood that has a lot of great restaurants and other activities nearby. We let the hotel know that it was her birthday. We were upgraded to a suite that had two balconies – one facing the ocean and the other facing the pool and up into Old San Juan (along the beach). When we arrived at the room there was an amazing “Happy Birthday” sign on the headboard of the bed and they sent a birthday cake to the room! Wow. What a welcome! (They also gave me vouchers for free drinks and casino matching money to play). That first night – we ran down to the beach and spent about an hour there. Then decided we were hungry.

We asked the front desk what is something uniquely Puerto Rican that we should have to eat and where to get it. They suggested mofongo (it is mashed plantains, grilled with garlic and oil, turned upside down and smothered with a soupy gravy and beef) at Orozco’s just down the street. 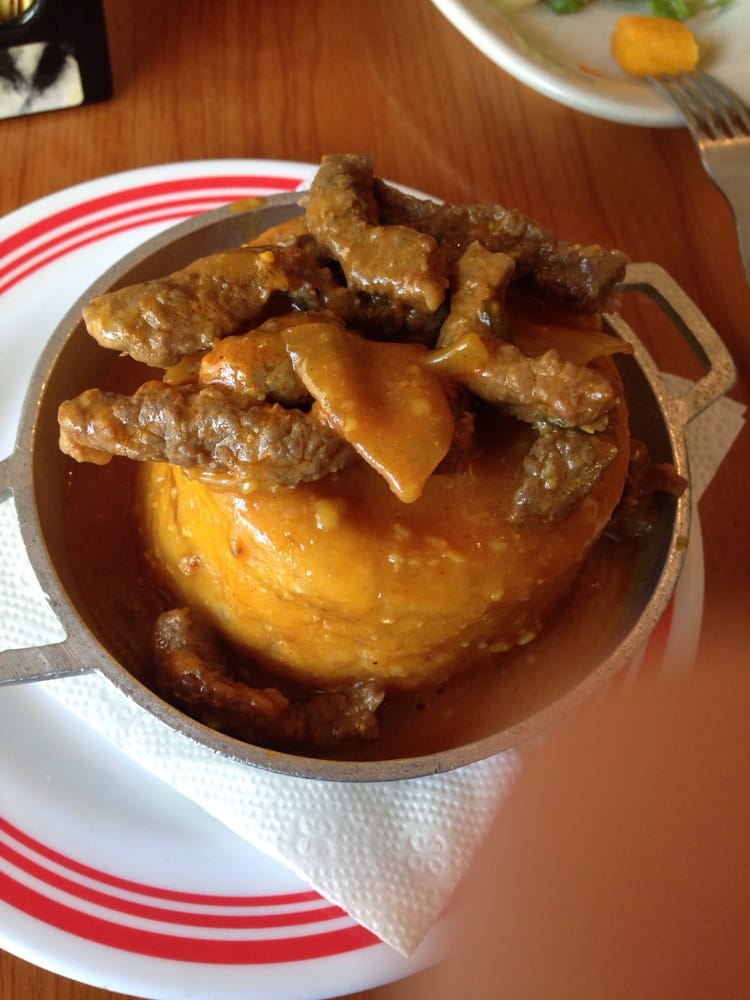 It was delicious. The girls (my daughter brought a friend) enjoyed the food (we also got empanadas and beans and rice) and the waiter was fairly young. He was super patient at letting them try out their Spanish (while he tried out his English). I also had a rum punch drink that was delicious (Hello! Bacardi is made there).

The next morning was early to rise. We headed out on a tour a the El Yunque Rain Forest Hiking Tour. The tour was arranged by my friends with the Puerto Rico Convention and Visitors Bureau via Destination Puerto Rico. They were really easy to work with and did a fantastic job of explaining everything to us. Our tour guide, George of the Jungle was friendly and knowledgable.

He seemed very excited to share his island with us. He gave us a brief history as we rode in the shuttle bus with about 20 other people. The first stop was the visitors center. He explained many of the plants and a bit about the Rainforest itself (it is the only one in the U.S. National Forest Service). Then we stopped at a small rainfall “la Coca Falls”, next was an observation tower. Again, the knowledge of the tour guide was amazing – not only did he tell stories but he also pointed out what the islands in the distance were. We did have to hike up several stairs to get to the top (so if you’re not of a mind to walk much this might be a part you skip) the last stop was an upper hill above La Mina falls. We hiked down on a fairly steep path. It took about 30 minutes to walk down. Then we were allowed to swim at the base of the falls. It was so beautiful. The water was a bit chilly (but felt good for the warm day). There were several tour busses there and it appeared that some locals were there as well. Then after swimming for about an hour – we headed back up the hill (the other way) and came out near a parking lot where George was waiting for us. We did hear some other people talking about how steep it was (it wasn’t a big deal for us Colorado gals). Indeed it does rain in the rainforest. The rain was not cold at all. On the way back to the hotel, we stopped at a road-side cafe (more traditional Puerto Rican food) and souvenier shop. Then the best part, is my daughter had mentioned her love of mangos – George took us to his “friends house” and let everyone get off the bus quickly and pick mangos! (We ate those for breakfast for the next couple days).

When we got back to the hotel we had about two hours to chill – then we were headed out (this time in our rental car*) for the BioBay Tour. The BioBay tour started at the beach in Fajardo, a town pretty much on the other side of the island. Once we arrived at the beach area of Fajardo, there were several tents set up. We easily found the one we needed to check in for our tour. There are two tours. We took the earlier one. They told us to use lots of bug spray and then wait. When everyone had checked in we were issued our lifevest and told that the kayak trip would be a 2.4 mile round trip tour. Across the bay, through the jungle (covered – and btw it was VERY cool but hard to photograph), to an open lake where the only way to this lake is via boat. That is where the plankton who when moved create a glow. The glow was not what we really expected – we really could see the blue sparkes of the light up plankton. Then we followed the lights on kayas ahead of us back through the covered part and across the bay.

Sunday was a beach day. I could not have been happier that we planned it this way. People in Puerto Rico either take their Sundays very seriously or Father’s Day seriously. But we were told that there would not be much open. We planned the day at the beach and pool right at the hotel. We did make it down the street for a brunch – and a short detour to a couple touristy shops (had to get a t-shirt and a snowglobe) and the Walgreens there (Icee). We explored the game room at the hotel and the pool. We later ate dinner right at the hotel as well.

Monday morning – the girls slept in just a bit (I woke up my normal early and walked along the beach).  We headed across the street for a quick starbucks breakfast and headed out to the airport in our rented car. We had to return the car right at the airport and then check in to our flight (SJU>MCO>DEN). The trip was short in time – but hopefully long in memories. I think this may just be a birthday gift she remembers for a long time.

*We rented a car as we were told that the bio bay tour that we booked was filled but we were the only three that were asking for transportation from the hotel to Fajardo where the tour would take place. We were offered to “buy out” the bus at $20 per person (even though there were only three of us) which would have amounted to something like $200. So I started looking at cab rides or uber. Everything that I could see and those that I talked to told me that a cab ride would be something like $80 each way. And since Uber is not a real presence there that it would likely be not much less. So I started looking into renting a car – which would get us to/from airport as well as this excursion to the tour. The car rental from the airport was around $125 (it would have been less expensive but I sort of decided to do it last minute and prices had gone up). They are crazy drivers – speed limits and signs mean nothing to them. They swerve and go all different speeds. Also our GPS/Siri didn’t work well on one of the carriers (we had two one of us was on ATT the other two on Verizon). Streets don’t seem to be well marked. They also like to ride on bumpers pretty tightly in traffic areas and we were in a small Kia that just making a turn felt like it was going to fall apart. We were supposed to have paid for parking at $10 per day at the hotel – but somehow the guy who marked our ticket didn’t charge us at all! I thought this was just us and our timing until I heard a lady on the beach on Sunday talking to someone on the phone and her plight sounded eerily similar. (There is a car rental desk at the hotel – but they were out of cars when I wanted to rent).

If someone ever asked me what my favorite season is, I always respond with an emphatic SUMMER! There is something so divinely awesome about the long warm days of summer. For most people it is also the time to slow things down – not have such a frenetic pace (especially those of us who are parents who drive our kids in circles to school related activities). I’ve only recently admitted to myself that I’m a planner – every summer I plan to knock these items from the summer bucket list.

No matter what you do this summer it is certainly bound to be fun! What is on your annual summer bucket list? What is your favorite summer tradition?