I recently took a trip that I won through my company (HelmsBriscoe) as a Top Producer. We were given a choice (with dates attached) to go to several places. But due to dates and locations I opted for Grand Cayman. We got to stay at the Ritz (FANCY!) for the Top Producer part and then we would extend our trip to the Westin since I have booked a group there (Westin is right next to the Ritz).

Upon arrival, I felt like a pretty big deal when they had a host meet us at the airport holding a sign with my name on it! (just ask anyone…I will tell anyone that I’m awesome). We were walked to the van that would transport us (my friend Melissa went with me) along with a few other HB associates and their guests to the beautiful Ritz. I would say transportation, air conditioning and fresh bottle of water was great. But even funnier, while we were waiting in the van – we saw that Grand Cayman has several wild chickens! I thought it odd so I took a picture and hoped we wouldn’t see chicken on many menus. Would that be like serving fancy road kill in the states? 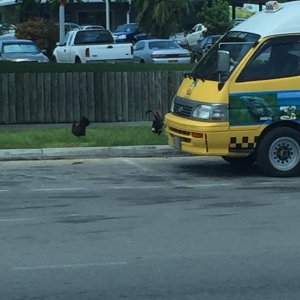 The island is just 22 miles – so nothing is far. It took us all of about 10 minutes to get from airport to hotel. Upon arrival we were greeted with drinks and cookies. I had a Rum Runner to start (since I figured that would be the extent of my running on this trip).  We were all set to go to our ocean view room! It was awesome and beautiful but, I just wanted out on the beach! ASAP! Then the ammenity of fresh juices and rum arrived. Ahhh. Make my own drink THEN head to the beach. These Ritz people are totally on my same line of thinking.

After a couple hours on the beach (and luckily no sunburn), we went back to the room to get a shower and get ready for the night’s party – on the beach! (No shoes required). It was beautiful and great sunsets. I really can imagine having a super event here!

The meal was delicious and I had to go back for more of the wahoo (sushi grade), conch soup, salads galore, other beef, and meats. Plus, lots more rum-runners!  And I even asked the guy playing steel drums if I could play. He taught me “Mary Had A Little Lamb.” (I’m writing more about that night – just don’t have it done yet).

The next morning was what I was looking forward to most. Swimming with stingrays! It was beautiful! And I hear that kissing a sting ray gets you 7 years of good luck! I’m getting 7 then. (More on that excursion specifically click here). 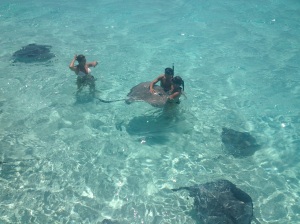 That evening we headed back to the hotel and had another great meal where we has so much food we could almost pop. There were at least six stations of food from seafood to pork and yes – I did see chicken on the menu! The invite said “Caribbean Chic” what is that?!?!

The next day we moved over to the Westin. We had the afternoon to ourselves then met in the lobby for a tour of the property and another amazing dinner on the beach. The dinner was fantastic. It was a menu specially prepared for us as they are re-furbishing the kitchen. The Chef presented each. I picked the top option (salad, fish, chocolate) and Melissa picked the lower option (crab cake, steak and brulee) and we shared each. I love traveling with a friend who will share with me and let me eat of her plate. 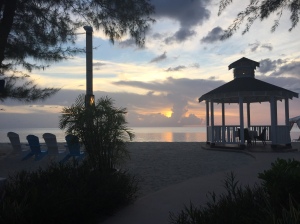 The following day Melissa and I decided to go on the city bus (which also acts a bit like a taxi as you flag it down when you want to hop on) to go shopping. We went to a high end shopping area (which also was said to have a farmer’s market but there were just a few booths) and then decided to go to Georgetown (the main town on the island where all the cruise ships dock). Georgetown was typical tourist area – with lots of souvenir junk and jewerly shops. When we were there we went to the Guy Harvey shop. He happened to be there signing autographs. (I have to be honest and say I have no idea who he was/is – but the locals seemed to be all about this guy). He was nice and we got some items autographed. Then we ate sushi at the Guy Harvey restaurant. It was probably some of the best fresh sushi I have ever had and we tried the conch fritters. (Eat like the locals?) Then headed back to the hotel to do dinner with some of the other folks from the group who were still around. It sounds like the highlights of this trip were the meals.

I was sad to see the next day go – and we had to head back to Atlanta to get back to Denver. The trip was fun fun fun and I would go again. I would like to go with my romantic interest. Those beaches are amazing. I hope I win another great trip next year too!